What is an eclipse? 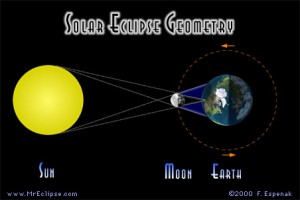 When the Earth, Moon and Sun are all perfectly aligned, observers on Earth may be able to witness an eclipse. There are two main types of eclipses; lunar eclipses and solar eclipses.

A lunar eclipse occurs when the Earth lies between the Sun and the Moon, and the Earth’s shadow falls on the Moon.

A solar eclipse occurs when the Moon moves between the Sun and the Earth, and blocks the view of the Sun. If the Moon only partially blocks the sun then this causes a partial eclipse; if the Moon completely coves the sun, the result is a total eclipse.

If the Moon’s distance is such that it does not appear as big as the Sun, it can leave a ring (Greek=”annulus”) around its edge, producing an annular eclipse.

The Moon’s orbit around the Earth is an ellipse, and its distance varies by about 6%; meanwhile the Earth moves in an ellipse around the Sun, and its distance varies by 3.4% between perihelion (when it is at its closest to the Sun, which is actually in January) and aphelion, when it is at its furthest from the Sun (in July). The maximum length of a total eclipse occurs when the Moon is closest to the Earth and the Earth is furthest from the Sun. The longest period of totality can last 7 minutes 31 seconds.

The eclipse took place early on the morning of Tuesday January 4, and with 75% of the Sun covered, this was the greatest degree of eclipse in the UK since 1999.

These simulated view show the phase of the eclipse at various stages.

You must never look directly at the Sun without using purpose-made solar filters.
Do NOT take chances by using smoked glass, CDs or anything else not specifically made for solar viewing.

There is a partial eclipse visible from the UK in 2018, but it will only be seen along the northern edge of Scotland.